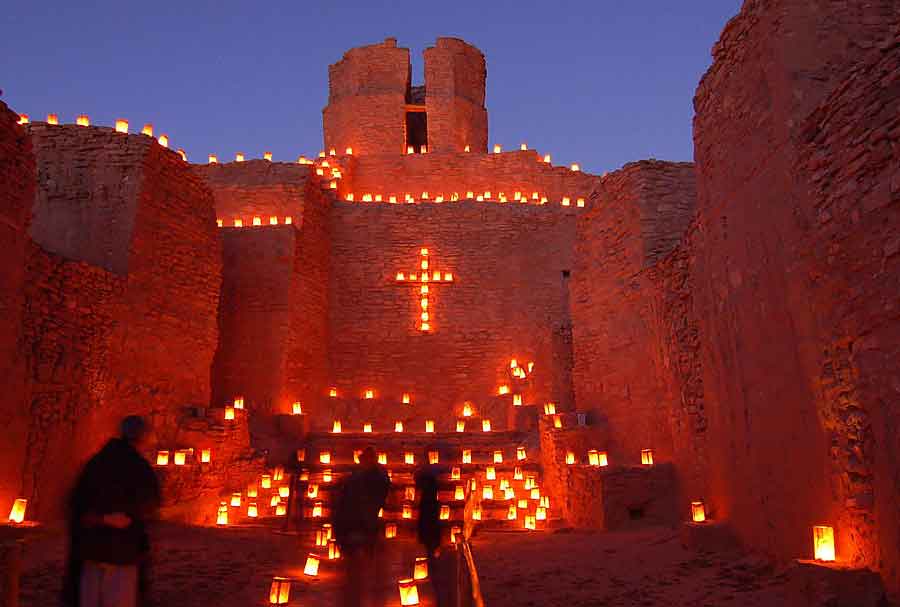 The Origination of the Luminary, Luminaria, Farolitas or Farolitos

The first luminaries in North America were bonfires of crisscrossed pinon boughs arranged in 3-foot high squares. Later luminaries were small paper lanterns, which were made when colored paper was brought to this continent from the Orient. Instead of hanging these delicate lanterns from trees or on wires, they were placed on the ground, on rooftops and along pathways.

Tradition has it that luminaria lit the way for Mary and Joseph in their search for lodging in Bethlehem.

Other writers place the tradition back even earlier, linking it to the Jewish celebration of Hanukkah, when people mark the miracle of the container of oil that was only meant to last one day but lasted eight.

To this day, Hanukkah, the Festival of the Lights, is celebrated with a multi-branched candelabrum, with a light for each day.

It's the multiple lights, and their use throughtout history in guiding, saving and celebrating, that cause some writers to see the Hanukkah candles as forerunners of luminaries.

Luminarias are also linked through history to the ancient tradition of communicating, warning and celebrating through linked bonfires.

For instance, the lighting of hundreds of bonfires long the Mississippi River in Louisiana originated with German and French settlers who migrated to the state in the 19th century. Not only did the lights guide Mary and Joseph, they were also meant to guide the Acadian version of Santa, Pa Pa Noel.

They say that Pa Pa Noel was able to navigate the river through thick fog to bring presents to the children only because of the chain of fires.

Today in Louisiana, Christmas Eve bonfires guide church-goers travelling on the water and along the river road to Midnight Mass.

The tradition of luminarias comes from Mexico. It has been celebrated for many years in New Mexico before spreading to communities throughout the United States, Canada and Europe.

The Pueblo Indians in New Mexico have long lit small fires outside their homes to light their way to church on Christmas Eve.

They learned the custom from Spanish settlers who introduced farolitos, or little lanterns, in the sixteenth century. The spanish settlers burned small bonfires along the roads and in the churchyards to commemorate Christ's birth.

By the 19th century, American settlers brought beautiful Chinese lanterns to hang from their doorways instead of building bonfires. But the lanterns were too expensive for many people so they began to make small lanterns out of paper sacks to save money.

The timing of the Fiesta de Las Luminaries, or the lighting of the way for the Holy Family, varies from community to community. Some concentrate on Christmas Eve, others enjoy their displays throughtout December.

In Europe, many people postpone their use of luminaries until just before January 6, the Festival of the Three Kings. Their luminaries light the wise men as they bring gifts to the Christ Child. In many European countries, Three Kings is the part of the festival in which gifts are given and feasting takes place. Christmas itself remains primarily a religious celebration.

In recent years, the use of luminaries has expanded so that they're used throughout the year at parties, weddings, religious ceremonies and charitable events. And they're used both indoors and outdoors. Luminaries enhance any occasion in which multiple lights will guide or celebrate or beautify.